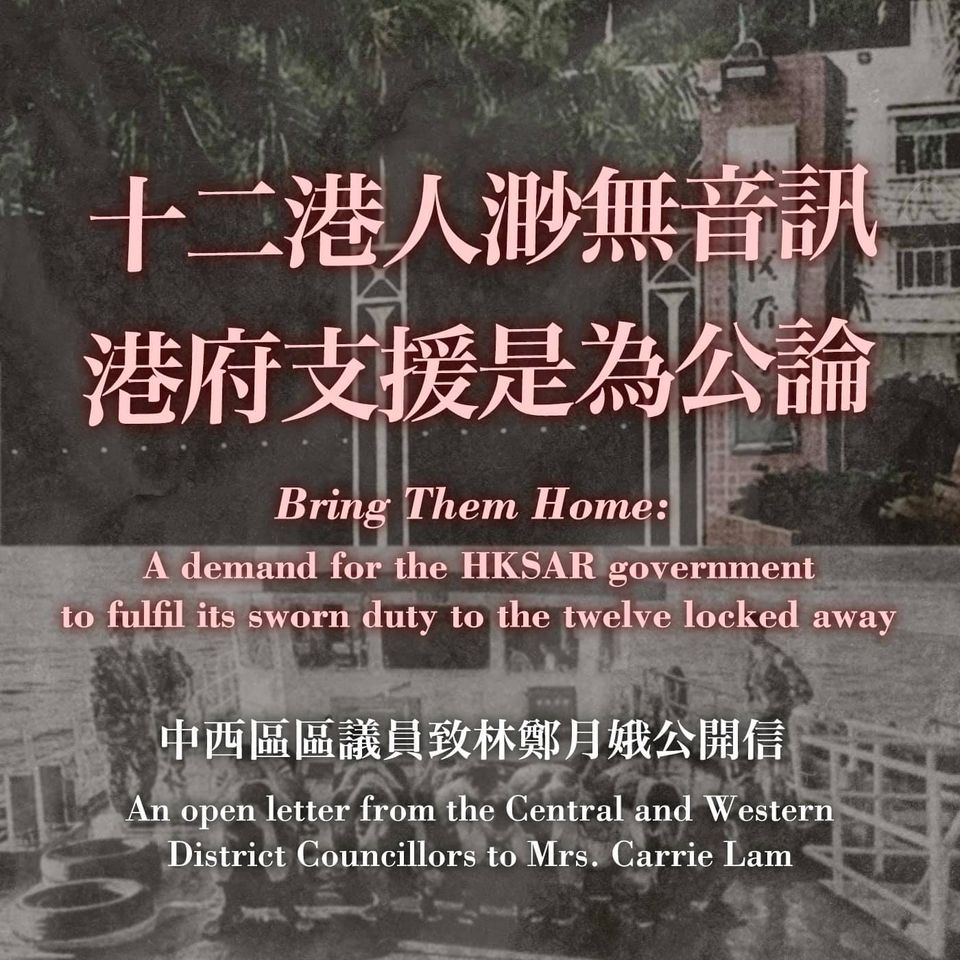 (Please scroll down for English version.)

It has been 24 days since the arrest of the twelve Hong Kong citizens on 23rd August this year by the Chinese coast guards. Since then they have been detained at Shenzhen Yantian detention centre and denied contact with their families and Chinese lawyers sent upon their families’ request under Chinese legal procedures. These unreasonable actions by the Public Security department have made it so that no family members or public have heard from these twelve since their arrest.

Officials from Yantian detention centre rejected detainees’ requests to arrange meetings with the lawyers appointed by their families, claiming that some of the detained Hong Kong citizens have already appointed their own lawyers. These arrangements and claims are deeply concerning, as it seems rather unlikely that those who have not had experience with Chinese legal procedures know how to appoint their own lawyers while in detention. It is even more concerning that these government-appointed lawyers have not yet contacted the families of the detainees. We are concerned that these “appointed lawyers” were arranged by the Chinese government without the detainees’ consent. These speculations cannot be verified, however, as the detainees’ families have still been denied communication with them. This means that they are unable to confirm the detainees’ decisions regarding lawyer appointments.

The International Covenant on Civil and Political Rights (ICCPR) guarantees the rights of individuals to “communicate with counsel of (their) own choosing” (Article 14.3b) and to “defend (themselves) in person or through legal assistance of (their) own choosing” (Article 14.3d). These rights have been clearly violated in this situation, as shown through the potentially forcible involvement of government-appointed lawyers, while lawyers appointed by the detainees ’own families are being threatened by National Security officials. The claims made online by Foreign Ministry Spokesperson Hua Chunying that the twelve Hong Kong citizens are attempting to separate Hong Kong from China, which effectively stands as a verdict before trial, is an even more blatant violation of the principle of the “presumption of innocence” in the ICCPR.

Among the twelve detainees, there are members who display particular vulnerabilities, including illnesses such as asthma, skin diseases and depression. There are even minors among the detainees. These vulnerable groups are the very people that the government should be actively protecting, serving, and caring for, and it is the government’s duty to provide appropriate medication and to contact their families while they are in detention.

However, the lack of transparency in the current Chinese legal system means that families can do nothing about the situation, and that it is impossible for us to determine whether detainees are being treated humanely/with basic humanity, let alone with an appropriate level of care. It is, therefore, the duty of the HKSAR government to actively intervene and ensure the safety and well-being of the detainees.

We call for the HKSAR government to respond to the four demands raised by the families immediately and take appropriate actions to ensure that the basic rights of Hong Kong citizens are not violated:

The twelve Hong Kong citizens and their families’ right to choose and appoint their own defence counsels should be upheld, instead of defaulting to government-appointed lawyers.

The HKSAR government should contact the Chinese officials on humanitarian bases to provide needed medication for the detainees.

The detainees should be allowed to call their families.

The HKSAR government has a duty to ensure the rights of the twelve Hong Kong citizens and bring them back to Hong Kong as soon as possible.