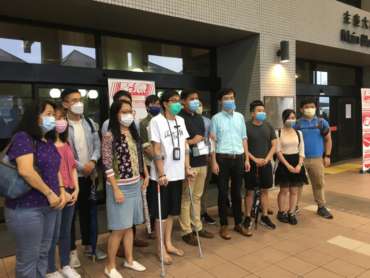 (Please scroll down for English version)

After spending 48 hours in the custody, Sam Yip is released at 3pm today. The clothing, accessories and phone Sam had when he was arrested were confiscated as evidence by the police. Raymond Li, a District Councillor from Sha Tin, was accused of participating in an illegal assembly and arrested too. He was injured during detainment in North Point police station.

Sam was slammed onto the ground when he was exercising his right as a District Councillor in Causeway Bay on Sunday. Without any intention to resist, the policeman kneed on his neck as a means to subdue him, then he was sent to North Point police station for detainment without any warning. Before he got into the police vehicle, a policeman talked at Sam and the other arrestees, “Your name is on the blacklist of the national security now”, “Your life is going to be fantastic from now on” (in a sarcastic manner). “You can stop your acting, there are no reporters here now.”, the police then said to Sam.

Every arrestee in North Point police station had to put on identical clothing with a number for identification. The police called the arrestees merely by the number but not their names. Such act was extremely insulting and dehumanizing. Although Sam requested medical attention when he was just arrested, he had to wait for 4 hours till 9pm to be sent to the hospital. Sam suffered from multiple minor injuries such as swollen head, bruises on the face and body, wounds on the knees and muscle tear on the neck, waist and the right knee cap. Sam also felt dizzy because his head has been hit during the arrest. After MRI and CT scans, he was proven to be fine.
According to the doctor and physiologist, the muscle tear will take days to recover, in the mean time, Sam will need crutches for his walking. Sam wants to thank all medical staffs for their care, his fellow District Councillors and lawyers who provided assistance to him.

As the representative of his voters, monitoring the government and police department is Sam’s duty. However he was treated with violence and hostility when he was just fulfilling his responsibility. Sam and his fellows in the pro-democracy camp will not back down from the violence of the police and the regime. For the injuries that he suffered, Sam reserves the right to sue.